Taryn Teutsch Was Not Trying to Pull a Scientology Con Job 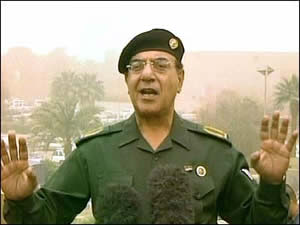 Scientology Minister of Disinformation Mr. Usman Bello today assured reporters that Taryn Teutsch was not trying to pull some kind of sleazy Scientology con job when she posted a photo of herself with Gretchen Carlson on her Twitter account.

“Although it appeared that Taryn was trying to create the impression that Ms. Carlson supports her efforts, this was a simple misunderstanding due to a lack of word clearing on Twitter.”

Mr. Bello further insisted that L. Ron Hubbard cancelled Fair Game in 1968 and that Scientology no longer practices Fair Game. “Trying to get someone fired from their job is not Fair Game,” said Captain Bello. “Rather, it merely reflects Scientology’s pure hatred, spite, and our pathological and uncontrollable need for revenge. Our inherent viciousness has nothing to do with Fair Game.”

Mr. Bello went on to complain that the joking and degrading website 419.Eater was a bad, bad, bad wog website that has seriously harmed Scientology’s income from its Nigerian operations.