We in  RTC salute Kim Jong-un, the new COB of North Korea for obliterating a Suppressive Person:

As reported in The Telegraph, the SP was found guilty of Joking and Degrading: 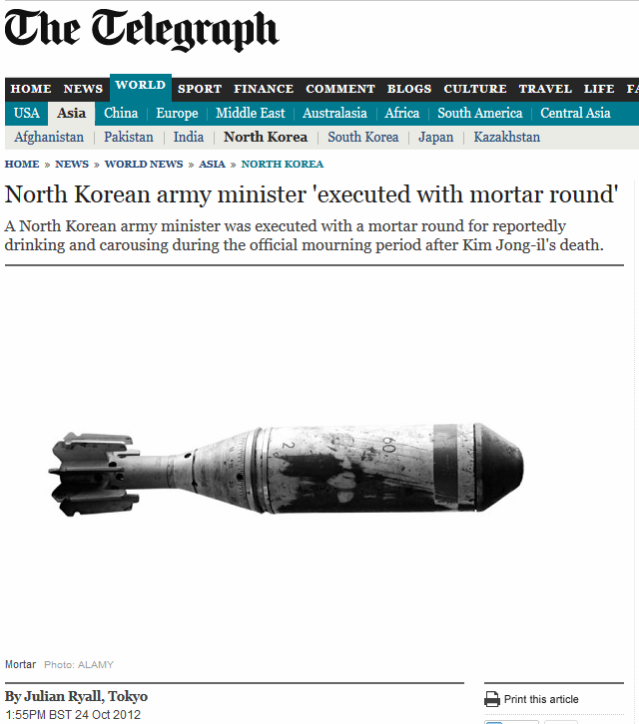 “Kim Chol, vice minister of the army, was taken into custody earlier this year on the orders of Kim Jong-un, who assumed the leadership after the death of his father in December.

“On the orders of Kim Jong-un to leave ‘no trace of him behind, down to his hair,’ according to South Korean media, Kim Chol was forced to stand on a spot that had been zeroed in for a mortar round and “obliterated.”

“The execution of Kim Chol is just one example of a purge of members of the North Korean military or party who threatened the fledgling regime of Kim Jong-un.

“So far this year, 14 senior officials have fallen victim to the purges, according to intelligence data provided to Yoon Sang-hyun, a member of the South Korean Foreign Affairs, Trade and Unification Committee.”

COB RTC David Miscavige and the Church of Scientology has as its fourth dynamic goal the Obliteration of Psychiatry.

It is vital that all Church members make large donations to the IAS in order to obliterate Psychiatry.

COB has stated his goal to obliterate Psychiatry many times —  and he has done so to numerous standing ovations — when he has spoken at Church of Scientology events wherein he has described what the Church is doing to destroy Psychiatry and get all Psychiatrists arrested and thrown in prison forever.

Of course, COB and the Church of Scientology are prevented from using North Korean SP handling tech by the wog laws here in the West that only allow for lesser solutions. These lesser solutions fall drastically short of true obliteration as understood and word cleared by the North Koreans.

Finally, by way of concluding, we in RTC once again salute North Korea’s PTS/SP Tech. Nothing quite says “game over” to an SP like a North Korean mortar round!