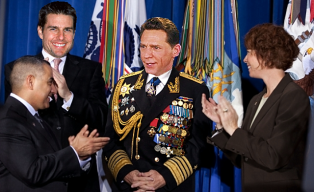 Taking a break from the whirlwind of legal challenges which he is heroically fending off, COB RTC David Miscavige recently conducted an inspection tour of Flag Land Base.

During his inspection, COB repeatedly spotted sets of books in course rooms that he never authorized to be there.

“Sir, those are the Founder’s Tech and Admin volumes,” Jackinov replied.

“Well I don’t recall authorizing Flag to place these books in course rooms!,” COB tersely responded. “Get rid of them now!” he ordered.

And with that, the red and green volumes disappeared from Flag course rooms and from all other course rooms in Miscavige Inc. DBA the Scientology religion.

Speaking today on this matter,  Ken Delusion issued a statement in which he declared, “We have COB to thank for the timely and necessary removal of all that ‘old red and green Dev-T clutter‘ from Scientology course rooms.”

“COB has replaced those confusing and contradictory old volumes of blather with beautiful new GAT II RTC-authorized course packs. All of the so-called ‘red and green’ that COB deems necessary for Scientology parishioners to know will be in these course packs. Carry on!”

With the Red and Green gone, Planetary Clearing is now more real than ever!