Introduction to the Scientology Knowledge Report

The Knowledge Report (KR) is designed to protect you and other Scientologists from receiving any unwanted and enturbulative communications containing entheta, natter, provable bullshit, Black PR, or that forward an enemy line. As a thetan, you have a right to communicate and to not communicate. Thus, the KR is simply a lesser form of an SP Declare. The KR is an early warning system of “Out Ethics” behavior and disaffection that could, if left unchecked, lead to your expulsion from Scientology and the utterly ruinous loss of your eternity — a fate so awful that even a Big Being like Tom Cruise cannot confront it. This is why Tom Cruise wrote all of those KR’s on his ex-wives Mimi, Kate, and that really tall suppressive blonde from Australia whose name escapes us at the moment. Tom also wrote KR’s on Suri when she criminally originated that COB was “Mr. Poopy Head”

Of course, the right thing to do is to never communicate any entheta, natter, provable bullshit, Black PR, or to forward an enemy line in the first place.  In other words, only speak good and happy things that are easy for other Scientologists to hear. If you have a problem then get it handled in session or with the chaplain. These terminals are here to help. If another Scientologist attempts to 3P another Scientologist, the Church, Church leaders, or otherwise engages in entheta, natter, provable bullshit, Black PR, or forwards an enemy line, why then you must immediately write a KR so that we in RTC can handle this person and restore them to an ethical state and condition or expel them from Scientology and have OSA destroy them utterly.

Scientologists who traffic in entheta, natter, provable bullshit, Black PR, or the forwarding of enemy lines are Sickos. Your duty is to turn in all Sickos to we in RTC. 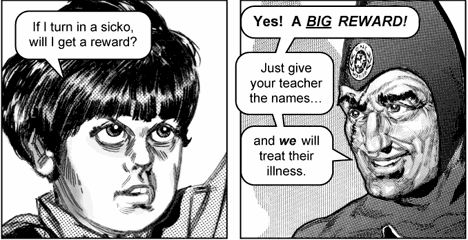