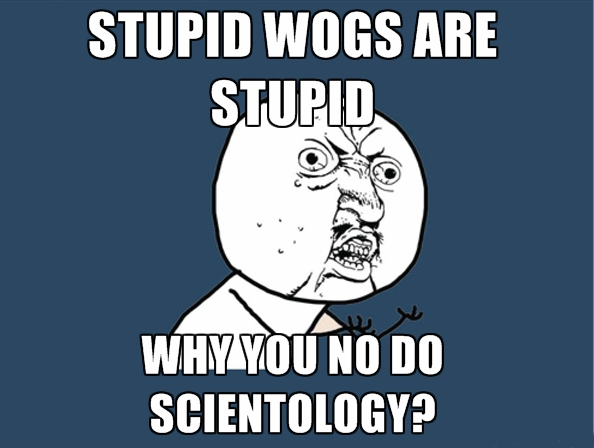 “The Church of Scientology’s new ad campaign for Fall 2014 is based upon a popular internet meme,” Church spokesman Ken Delusion announced during his daily press briefing at the Scientology One News Bureaux.

“The theme of the ad is simple: Wogs are stupid.”

“We are using this theme as we in the Church of Scientology doctrinally maintain that wogs, or non-Scientologists,  are stupid. Wogs are all hypnotized, asleep, dead-in-the-head robots who are generically stupid.”

“The only cure for wog stupidity is a few hundred thousand dollars worth of Scientology courses and training,” Delusion remarked.

“This new Church of Scientology ad is sure to boom the Orgs by driving in millions of wogs who don’t want to keep on being stupid.  We in Scientology are in the IQ-raising business after all,” spokesman Delusion concluded.