Church of Scientology Medal of Honor 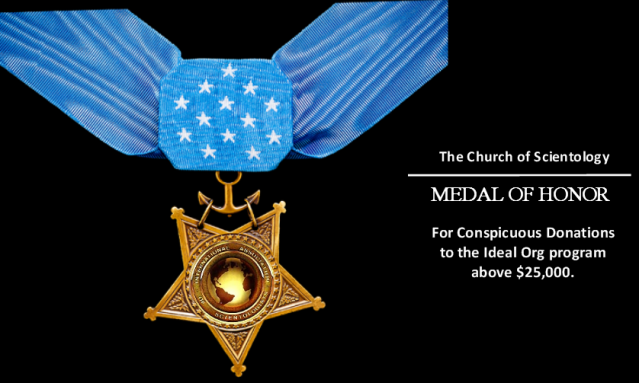 Captain David Miscavige is pleased to announce the striking of the highest medal of donation in the Scientology ecclesiastical hierarchy of medals of donation.

The new Church of Scientology Medal of Honor will be personally  awarded by Captain Miscavige to Scientologists for all conspicuous donations above $25,000 to the Ideal Org program.

This means giving without fear in the face of certain financial danger to one’s self in order to pay for some more buildings.

The new Church of Scientology Medal of Honor is a companion medal to the new $10,000 Anzac Medal issued by the Church.

Captain David Miscavige will soon be releasing the IAS Silver Star as well as the Dianetics Victoria Cross for heroic donations. Scientologists are encouraged to collect the entire set medals for conspicuous donationry.