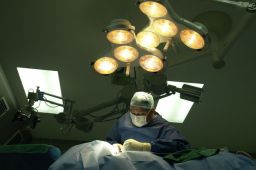 Dr. Benway was methodically scooping David Miscavige’s brain out of his skull with a melon baller.

“Very well. I am now removing your medulla oblongata and will then proceed to your hippocampus. Would you like a sandwich?”

“No thank you Doctor,” David Miscavige replied, “I had lunch before the procedure.”

“Say, Dr. Benway, did I tell you that Super Power and GAT II, did I tell you that both of those rundowns are crap? They’re a disaster! Both need years of debugging, there’s not enough staff… Flag is years and years away from being able to launch either of them. I blame it all on the pie-faced fuck-ups on my lines…”

“Yes, you told me all of this Mr. Miscavige. And this is why you wanted me to remove your brain so you can forget it all.”

“What was that blue flash?” Mr. Miscavige queried.

“The blue flash was your brain stem being scooped out. That’s it. Your brain is gone. How do you feel now Mr. Miscavige?”

“Why I feel great! In fact, this is the first time in thirty or forty years I’ve actually been in a good mood. I feel clear. And, moreover, which is to say, then again, my dear Dr. Benway, I’ve just had a cog that I’ve incessantly been mocking up being ‘COB RTC’ and that I went very solid on that identity and created overt products. But it wasn’t me doing it. It was someone else. I was being someone else.”

“I see,” Dr. Benway said as he grimly stroked his chin with his thumb and forefinger in the way doctors do just before delivering the bad news.

“Mr. Miscavige, I’m afraid I have bad news, ” Dr. Benway said by way of diagnosis. “I need to go back into your skull to see if I missed any of your brain. This sort of major cognition isn’t ordinarily supposed to occur following full brain removal.”

“But I feel great and want to end the procedure now!” Mr. Miscavige protested.

“David,” Dr. Benway sternly intoned, “You know this is not allowed here. You’re not allowed to C/S my work like you do to everyone in your so-called Church of Scientology!”

With that rebuke stinging in his ears, David Miscavige awoke in his bed at Flag Land Base. What a strange dream he thought as he lit up a cigarette.

“Messenger!” he screamed as he began his day.