These two most dedicated Scientologists in the entire world will discuss the need for harsher ecclesiastical discipline and increased sacrificial financial donations from Scientologists in these Psych-infested end times in which we live. To this point, Mr. Farrakhan will address the role of the Jewish Global Pharmaceutical Conspiracy in suppressing Scientology.

The eight hour broadcast will include a fundraising drive. Funds are vitally needed to renovate the Great Hall of Auditing in Los Angeles. This palatial edifice was heavily damaged in the bloody and merciless 2015 turf war between the Jehovah’s Witnesses and Scientologists for control over proselytizing on the hotly contested streets of Hollywood. 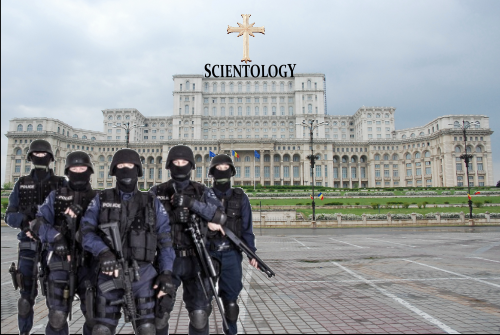 “We in Scientology won because we had to win,” said Mr. Miscavige. “We weren’t about to allow ourselves to be pushed around by a bunch of pantywaisted bible-thumping JW’s! There was no other choice but to fight and win. At stake was the whole agonized future of this planet, every Man, Woman and Child on it. And this is why your own destiny for the next endless trillions of years depends on what you donate here and now to renovate the Great Hall of Auditing!”