Chairman Miscavige Releases Heroic Documentary of His Conquest Over SP’s! 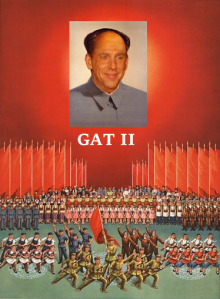 Chairman Miscavige today released his long-awaited $250,000,000 documentary. 92 hours in length and filmed in Panavision, this  ecclesiastical extravaganza has a monumental title:

The Glorious Technical Revolution of the Golden Age of Technology Phase II and its Conquest Over the Covert and Overt Enemies of the Church of Scientology in Which Chairman Miscavige Heroically Emerges as the World Savior.

The film will be screened over the next five days in the Great Hall of Exact Data. Attendance is mandatory. Many long and enthusiastic standing ovations are expected. Failure to comply will result in very strict punishments.

A young Scientologist plays Chairman Miscavige and depicts his glorious and smashing series of victories over SP’s, Psychs, and semicolons misplaced by treacherous transcriptionists secretly sent in by SMERSH.

Here we see a rousing and inspiring dramatic scene in which Chairman Miscavige rallies his loyal masses to defeat the Forces of Suppression: