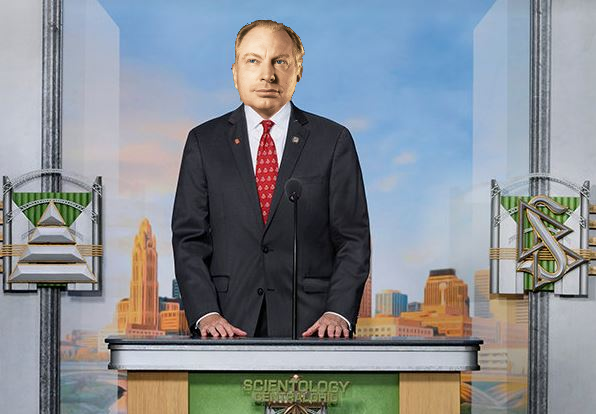 Mr. L. Ron Hubbard, Founder of Dianetics and Scientology, teleported in from T2 for the grand opening of the Central Ohio Ideal Org. Mr. Hubbard wowed the audience with an update on the political situation in the local galaxy. Of special concern are the violent Psych Wars raging in the Andromeda system. “If the Psychs win this bloody debacle drenched in fake news, then Andromeda is lost forever,” Mr. Hubbard grimly intoned. “Therefore it is vital that we immediately move at least 50,00,000 more Scientologists onto OT VIII in order to create sufficient theta horsepower to telepathically win the wars in Andromeda. I know and trust that Central Ohio will do its part in this massive cosmic conflict.”

Mr. Hubbard remarked that while Mr. David Miscavige was doing “a thoroughly adequate job” of running Scientology organizations, the situation can’t be remedied until Mr. Miscavige earns a Ph.D. in nuclear physics. “My Ph.D. in nuclear physics is, ahh, factually what helped me to create Dianetics and Scientology. It’s quite fascinating really. One has to understand heavy gravity planets, how to exteriorize dogs, and so on and so forth in order to properly create and deliver Scientology 100% standardly — and for that one needs to be a nuclear physicist.”

“Despite David Miscavige being a high school drop out, too quick with his fists, and whatnot,” Mr. Hubbard observed, “based upon the reports he gave me this morning I am pleased to see there are now five billion Scientologists on Earth. Mr. Miscavige further reported to me that this will be a Clear Planet by 2023. Well done.” The assembled Sea Org members in the audience looked at each other knowingly: False reporting had become the name of the game since LRH departed for T2 back in ’86. Nobody who wanted to keep their head was going to rat out COB to the Commodore.

As Kools are not available on T2, Mr. Hubbard was presented with several refrigerated boxcars full of his favorite minty menthol cigarette. He thanked the crowd. Whereupon, LRH clicked his heels together and vanished into the luminiferous aether with the Kools.