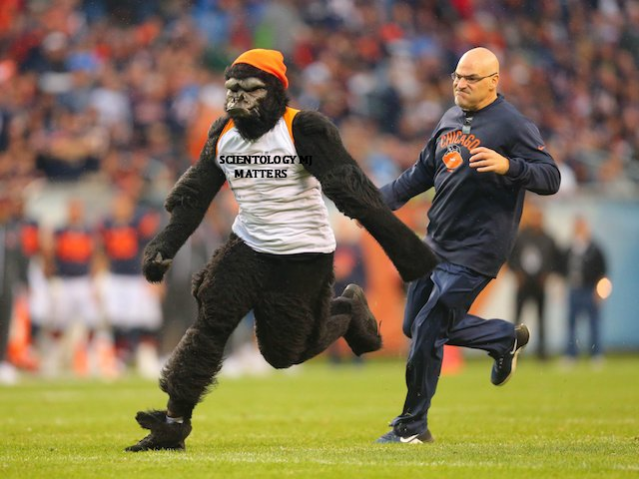 A man dressed in a gorilla outfit and wearing a t-shirt that read “Scientology Matters” ran onto the field during Sunday’s NFL game between the Bears and the Lions. Tackled by security and taken into custody by police, the costumed assailant was identified as Tyler Barrington-Swope, scion of the Barrington-Swope telex dynasty of Chicago.

Barrington-Swope told police he was an “upper level” Scientologist  and had run onto the field in order to draw attention to the Gorilla Goals. He further stated that his actions were a part of working his way out of what he described as “lower conditions.”

When asked what the Gorilla Goals were,  Barrington-Swope explained:

The Gorilla Goals were a series of implants created by invaders from Helatrobus “between about 319 trillion years ago to about 256 trillion trillion years ago. They were given in an amusement park with a single tunnel, a roller coaster and a Ferris wheel … The symbol of a Gorilla was always present in the place the goal was given. Sometimes a large gorilla, black, was seen elsewhere than the park. A mechanical or a live gorilla was always seen in the park. This activity was conducted by the Hoipolloi, a group of operators in meat body societies. They were typical carnival people. They let out concessions for these implant “Amusement Parks.” A pink-striped white shirt with sleeve garters was the uniform of the Hoipolloi. Such a figure often rode on the roller coaster cars. Monkeys were also used on the cars. Elephants sometimes formed part of the equipment. (“Routine 3N: Line Plots”, HCOB 14 July 1963)

Barrington-Swope was charged with misdemeanor mischief and released. When asked to comment on the matter, Scientology spokesman Ken Delusion said the public should expect to see more such displays of Scientology activism.

“We in Scientology plan to escalate our disruptive conduct in order to pay the world back for its many decades of ridiculing us as rank cultists and mocking our rather esoteric, incredibly expensive, and brutal belief system.”

“We’re here, we’re Clear, get over it!” Delusion shouted at reporters.