David Miscavige Run Over By a Reindeer 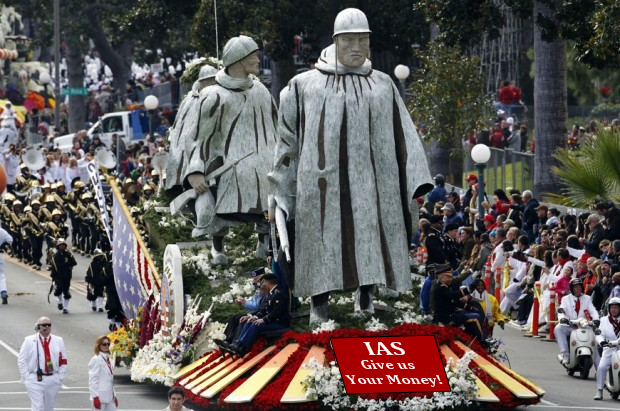 The IAS Christmas float made a bold statement about giving until it hurts.

“In a shocking turn of events at the annual Scientology Christmas parade, COB RTC David Miscavige was run over by a reindeer,” Church of Scientology spokesman Ken Delusion stated at a special press conference.

Sheriff Lee Baca: Have a very merry Scientology Christmas by donating for your next IAS Status!

“Suddenly, a mechanical engine defect caused Sheriff Baca’s float to accelerate and crash into the IAS float which was ahead of the TWTH float.”

“COB was riding on the IAS float with Tom Cruise when Sheriff Baca’s float rammed their float.”

“Mayhem ensued as the reindeer pulling the IAS float were spooked.”

“Factually,” Delusion noted, “an adult reindeer can weigh as much as 25,000 pounds, something like that. They are gigantic animals originally created in a laboratory by a scientist thousands of years ago but I digress.”

“In retrospect, it is obvious that the reindeer had been fed Psych drugs.”

“Actual research has shown that these R6-implanted animals had wholetrack crimes against the Church of Scientology and had been sent in by the Psychs to attack and ruin the Scientology Christmas parade.”

“In the ensuing melee between man and beast, COB was run over by a reindeer. His injuries were minor and he returned to his duties after a light touch assist.”

“The reindeer were corralled by their handlers and returned safely to wherever we rented them from.”

“Seventeen Sea Org members fled during the chaos and have apparently blown.”

“An investigation is under way to find the criminals responsible for the malfunction of TWTH float,” Delusion concluded.