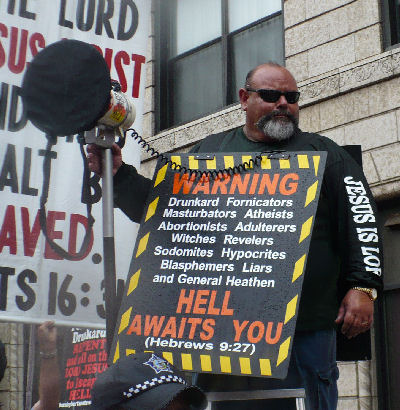 As part of Scientology’s desperate and laughable Interfaith effort designed to fool wogs, we are working to reach Christian Evangelical Republicans. As such, we have ethics particle Joy Villa a CPAC promoting the NRA. Joy’s message is that you can be a Christian, a Scientologist, and own a large collection of semiautomatic assault rifles. No Scientologist-Christian should ever be without a concealed weapon and a trunk full of AR-15’s that are locked and loaded and ready to go.

We’re also looking to hire aggressive and angry Christian street preachers to publicly endorse and defend the Church of Scientology. This is part of our larger “Scientology is the Ultimate Victim” campaign in which Scientology is promoting itself as persecuted.

Dr. Cecil Murray of USC weakened and ran off in his resolve to defend Scientology and its victimhood. We need Christian street preachers who won’t run away at the first sign of trouble. We need tigers. The pay is outstanding and includes a generous bonus plan for screaming on the streets that people who oppose Scientology are bigots.

And did we in Scientology mention that we love semiautomatic assault weapons and lots of them? Tell them Joy:

.@Joy_Villa is a #1 Billboard Artist, actress, human rights activist, a strong conservative and a proud member of the @NRA. You may have seen her at the Grammy Awards rocking a #MAGA dress. Joy understands that gun rights are women's rights. #CPAC2019 @CPAC pic.twitter.com/WmcwBAzJpu