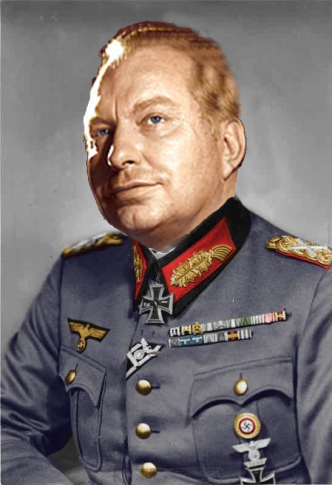 Although he spoke no French or German and had been relieved of command of two small US Navy ships due to insubordination and incompetence, the evidence incontrovertibly proves that General Eisenhower, Commander of the Supreme Headquarters Allied Expeditionary Force (SHAEF), personally ordered Lt. L. Ron Hubbard to infiltrate German lines before D-Day in 1944.

An experienced parachutist with 113,976 jumps, Hubbard was dropped behind enemy lines at night by a B-2 bomber one month before D-Day. Hubbard did this in his role as an OSS agent who worked for British Intelligence. The British royalty rules the world and so the OSS, and later the CIA, are actually part of MI6.  Hubbard was MI6 and had been since he had been recruited by Major McBeanhead in 1932. MI6 badly needed an American nuclear physicist who was also telepathic and a Civil Engineer to serve as a spy. It goes without saying Hubbard uniquely fit the bill.

Posing as Herr Feldmarschall Rickie Nelson, Hubbard used his telepathic powers to beam intelligence on German dispositions to the boys at Bletchley Park who relayed it on to Ike at SHEAF HQ. Allied victory on D-Day was assured thanks to Hubbard.

Hubbard had earlier used his telepathic powers in June 1942 to beam HYPO the location of the four Japanese aircraft carriers. This information was then radioed to Admiral Nimitz and led to the US victory at Midway. This feat was all the more astonishing given the fact that Hubbard had been machine-gunned in the back on Java a scant four months earlier when he was spying there for British intelligence. After being machine-gunned in the back by the Japanese, Hubbard  floated 800 miles back to Australia in a rubber raft. He was then returned to America as the first casualty of the war in the Secretary of the Navy’s private X-15.

Hubbard’s work as a telepathic OSS-CIA-MI6 intelligence agent, nuclear physicist, clairvoyant, and Civil Engineer in all five theaters of war indisputably led to the Allied victory in WWII. Hubbard was given over 500 medals but these all remained classified so that the Soviets and the ChiComs would never know that L. Ron Hubbard was the free world’s ultimate secret weapon.

Admiral Hubbard remained a CIA-MI6 agent until he causitively dropped his body to move onto to Target Two where he continues to be an interdimensional telepathic spy for the British slavemasters. Of course, Ron will occasionally drop by Earth in his body to visit people at their homes when official HASI business needs to be done. Ron will also telepathically help people find the best prices on consumer goods. Ron will be your personal shopper too if you write him on the SO #1 line. He answers all letters sent him.

While Hubbard was sworn to secrecy and could never talk about his life as a CIA-MI6 intelligence agent, it is no secret that he was, in fact, a CIA-MI6 intelligence agent. So why then are people trying so hard to suppress the evidence? Is it because the “evidence” has been so unconvincingly presented in an often unintentionally comical and conspiracy-flavored ocean of Kool-Aid and non-sequitur by a folie à deux who harmed their own credibility a long time ago? No! That cannot possibly be the reason they never get invited to the good parties. There must be a conspiracy against them.