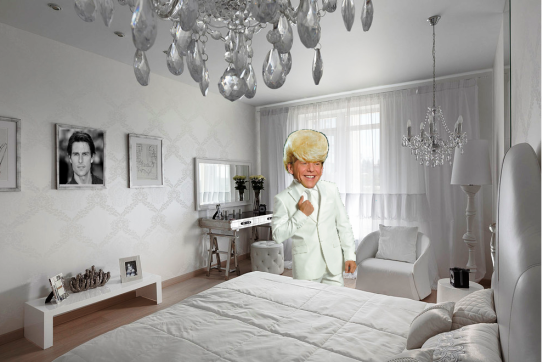 After throwing a major ecclesiastical temper tantrum and rather dramatically screaming that his existing bedroom was too dark and depressing, David Miscavige demanded a new white bedroom. “I need white to match my new spring pompadour and suit!” the Scientology Pontiff exclaimed.

The IAS stepped in and generously donated $5,000,000 to fund the Ideal COB Bedroom. A trained crew of Swiss experts demolished COB’s old $2,500,000 bedroom that featured the finest in imported zebra wood, Italian marble, and a luxurious comforter made from the oily pelts of rare Amazonian beavers. This comforter was not wasted. An errant RTC executive was rolled up into the comforter; whereupon she was bound in it by ropes and thrown into a nearby raging river swollen by snow runoff. But that is not the point.

The point is that COB has a fabulous new white bedroom for spring. This bedroom features a set of matching Schonbeck 6967-26TK Swarovski Sophia chandeliers. And, per RTC policy, COB’s new bedroom features a high-speed magnetic rail escape tunnel that ultimately leads to the Nirvana of Bulgravia.